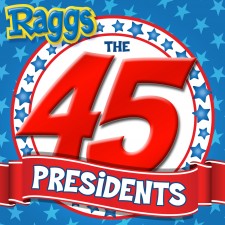 Charlotte, NC, November 16, 2016 (Newswire.com) - ​​Presidential history just became easier with “The 45 Presidents” song, which is now available exclusively on iTunes for $.99. The catchy 20-verse song by the Emmy Award-winning Raggs Band from the Raggs children’s TV series is sung to a pop arrangement of “Yankee Doodle” and “Hail to the Chief” with three historic quotes added as rap lines.

Musician and lead vocalist for the popular, Beatle-inspired Spongetones, Jamie Hoover, was tapped for the arrangement, including alternative Clinton and Trump versions, several weeks before the election. Becky Kent Story, lead songwriter for Raggs, and producer Alexandra Anderson, wrote a fun, sing-along song that creatively linked all 45 presidents – in under 3 minutes.

"Donald Trump has made the jump, From businessman to POTUS, He sealed the deal, he made it real, Now forward he will lead us."

“It was challenging to rhyme iconic names like Washington, Roosevelt and Obama, but lyricists Story and Anderson gave me a great foundation to work with and the Trump verse is both accurate and clever,” arranger Jamie Hoover said.

“Donald Trump has made the jump,

From businessman to POTUS,

He sealed the deal, he made it real,

Now forward he will lead us.”

“The 45 Presidents” song is part of a multi-media trio that also includes a music video and an 84-page activity book, which are designed to complement and reinforce the learning process for Kindergarten through Grade 8.

The music video stars 30 children, parents, a Labrador Retriever, Raggs the character and a large yellow school bus. The presidents are featured as caricatures by nationally renowned illustration Jeff Mangum in both the music video and activity book. The music video is available on YouTube and the large format activity book, written by Toni Steedman Zelickson, president of Blue Socks Media, which also owns Raggs, can be ordered online for $8.99 at The45Presidents.com.