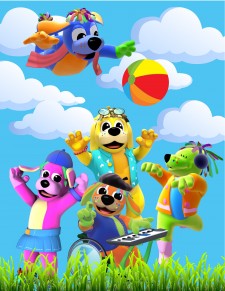 Raggs, 10-minutes shorts and music videos, can be found in the PlayKids “Featured” and “Play and Learn” wagons in three languages, English, Spanish, and Portuguese. Each Raggs short follows Raggs, Trilby, Pido, B.Max, and Razzles, through engaging and educational adventures in their cool clubhouse. Music is an integral part of this fast-paced show, providing a hook to reinforce educational and pro-social lessons.

"As a global, learning-entertainment platform, we are extremely careful to select shows for PlayKids that translate properly and resonate across cultural borders, which is why Raggs is a perfect fit. We are delighted to offer our fans new, high quality content such as Raggs!"

Along with episodic shorts, PlayKids also houses select videos from the new Raggs “All-Time Favorite Kids Songs” collection, which has earned 30 million views on RaggsTV, the Raggs channel on YouTube. The collection includes familiar favorites, “Monkeys Jumping on the Bed,” “Old MacDonald,” “The ABC Song,” and “Wheels on the Bus,” all recorded in Raggs rockin’ style. The companion album, “20 All-Time Favorite Kids Songs,” is also available for purchase on iTunes.

“As a global, learning-entertainment platform, we are extremely careful to select shows for PlayKids that translate properly and resonate across cultural borders, which is why Raggs is a perfect fit. We are delighted to offer our fans new, high quality content such as Raggs!” commented Eduardo Henrique, Co-Founder & Head of Global Expansion at PlayKids.

PlayKids has been entertaining and educating millions of families in over 100 countries. PlayKids apps have over 17 million downloads and boast other popular brands.

“We are very excited to be featured on PlayKids,” said Toni Steedman, Raggs creator and President of Blue Socks Media, “it is a prestigious platform with quality content that families know and trust, and we believe is a great new home for Raggs.”

PlayKids apps are available on multiple devices, including smartphones, tablets, smart TVs and watches and you can download PlayKids, PlayKids Stories, PlayKids Talk, PlayKids Fly and PlayKids Party in the Apple App Store and Google Play.

Raggs is an Emmy Award-winning, musical preschool television series about five colorful pups who learn life lessons in a cool clubhouse though the innovative mix of live action stories, music videos, concerts, cartoons and interviews with real kids. Originally produced in Sydney, Australia, with supplemental U.S. production, Raggs is available in Australian English, U.S. English and Spanish. Portuguese and French language dubbing is in production.  Raggs’ expansive library includes 195 finished half hour episodes, 200 original songs, over 1,000 segments and the recent production (2015) of 20 classic songs with companion animated cartoons. The entertaining and educational series is based on the original characters created by Toni Steedman, a Charlotte, NC, advertising executive, for her then six‐year‐old daughter Alison. Raggs is an international brand including TV distribution, multi-platform digital distribution, CDs, DVDs, toys, books and touring. With over 4,000 live performances around the world, The Raggs Band’s live event experience has expanded to include a long-term partnership called “Play at Palladium with Raggs” with the Palladium Hotel Group at their resorts in Mexico, the Caribbean and Brazil. Raggs and all rights are owned by Blue Socks Media LLC, Charlotte, NC.  For more info, go to www.raggs.com.

Developed by Movile, the PlayKids platform was created to strengthen the bond between parents and their children through fun and educational digital content. There are thousands of books, games, interactive activities, lullabies and shows that contribute to the development of children from young toddlers to preteen. There are four children’s apps in the PlayKids family which are global leaders in their own categories: PlayKids, the original app, offers more than 3,000 shows, games, sing-a-longs, activities and lullabies for children between 2 and 5; PlayKids Talk is a safe, instant messaging tool that allows relatives and kids to communicate in a fun way; PlayKids Stories has more than a thousand virtual books from Disney, Pixar, Marvel, among others; and PlayKids Party, which brings ten fantastic games and is aimed at kids from 2 years old and up. A single subscription unlocks full access to all apps. PlayKids products are available in more than 100 countries and has been downloaded by more than 17 million families.