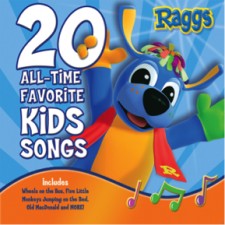 Charlotte, NC, June 28, 2016 (Newswire.com) - ​​​Starting this week and running through August 26th, Raggs, the popular musical preschool TV series, will host a summer-long album giveaway on Facebook and social media.  Each week, friends and fans are encouraged to upload photos based on topics with summer themes such as water, food, sports, beaches, or colors to Raggs' Facebook or Instagram for a chance to win one of 10 free downloads of “Raggs 20 All Time Favorite Kids Songs” album.

Each Thursday, starting June 30th, the theme will be posted on the Raggs Facebook and Instagram pages. On the following Monday, weekly winners will be chosen based on their interpretation of that week’s theme. Participants must “tag” Raggs in the photo and include the hashtag #RaggsBig100 in the caption. Participants must also“Like” Raggs on Facebook and “Follow” RaggsTV on Instagram.

"This is a fun way to get families involved in creatively using new media."

“The Raggs songs are great sing-a-along songs for summer carpooling and trips,” Brandon Davids of DavidsTV, a popular family channel on YouTube, said. “And, this is a fun way to get families involved in creatively using new media.”

Winners will be notified via direct message and receive a code to download the free album, which includes Raggs rockin’ versions of classics like, “Monkeys Jumping on the Bed,” “Old MacDonald,” “London Bridge,” and “Six Little Ducks.” The Raggs classic songs and companion videos have received over 30 million views on RaggsTV, the brand’s YouTube channel.

There is no purchase required to participate. Winners will be chosen by the employees of Blue Socks Media LLC, the owners of the Raggs brand, and all decisions by Blue Socks Media are final. All information and photos received during this promotion will be used solely for the promotion.

Raggs’ Big 100 Album Summer Giveaway runs weekly from June 30thth through Labor Day Weekend and is available to families who have access to new media and can access CD Baby to download music.​

“Raggs” is an Emmy Award-winning, musical preschool television series about five colorful pups who learn life lessons in a cool clubhouse though the innovative mix of live action stories, music videos, concerts, cartoons and interviews with real kids. Originally produced in Sydney, Australia, with supplemental U.S. production, “Raggs” is available in Australian English, U.S. English and Spanish. Portuguese and French language dubbing is in production.  “Raggs”’ expansive library includes 195 finished half hour episodes, 200 original songs, over 1,000 segments and the recent production (2015) of 20 classic songs with companion animated cartoons. The entertaining and educational series is based on the original characters created by Toni Steedman, a Charlotte, NC, advertising executive, for her then six‐year‐old daughter Alison. “Raggs” is an international brand including TV distribution, multi-platform digital distribution, CDs, DVDs, toys, books and touring. With over 4,000 live performances around the world, The Raggs Band’s live event experience has expanded to include a long-term partnership called “Play at Palladium with Raggs” with the Palladium Hotel Group at their resorts in Mexico, the Caribbean and Brazil. “Raggs” and all rights are owned by Blue Socks Media LLC, Charlotte, NC.  For more info, go to www.raggs.com.

The Davids family, including dad Brandon, his wife, Alana and their two boys, Dylan and Jagger, began posting family activities and product reviews on YouTube in 2014, accumulating 42,000 subscribers and nearly 40 million views. Reviews include Power Wheels, Halloween Anamatronics and other toys and challenges.