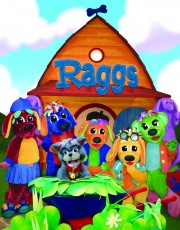 Raggs began airing on the QUBO channel, ION Television’s multi-platform service, in 2013.   The net effect is Raggs will now be exposed to more viewers nationally since ION Television has strong exposure on most major cable providers’ basic tier service.

"ION Media Networks has a long-standing commitment to providing entertainment for children that delivers educational messaging and positive values, and Raggs delivers on this promise."

Raggs stars five high-energy canine characters -- Raggs, Trilby, Pido, B. Max and Razzles, and their wisecracking pet cat, Dumpster -- who learn life lessons in a their cool clubhouse. The Raggs stories focus on key preschool educational and pro-social lessons, which were overseen by Raggs head of educational content, Dr. Shalom Fisch, a developmental psychologist and industry expert who has also authored several books studying the effect of Sesame Street on its viewers.

“ION Media Networks has a long-standing commitment to providing entertainment for children that delivers educational messaging and positive values,” according to Daniel Zaretsky, Vice President, Distribution and Marketing, ION Media Networks, “And, Raggs delivers on this promise.”

Raggs, which is also available in Spanish and Portuguese and soon in French, continues to grow its broadcast presence in all media as well as live shows and merchandising. For more information, go to www.Raggs.com or qubokidscorner.com. Check local listings to find ION Television in your area.

The entertaining and educational series is based on the original characters created by Toni Steedman, a Charlotte, NC, advertising executive, for her then six‐year‐old daughter Alison. Raggs is an international brand including TV distribution, multi-platform digital distribution, CDs, DVDs, toys, books and touring. With over 4,000 live performances around the world, The Raggs Band’s live event experience has expanded to include a long-term partnership called “Play at Palladium with Raggs” with the Palladium Hotel Group at their resorts in Mexico, the Caribbean and Brazil. Raggs and all rights are owned by Blue Socks Media LLC, Charlotte, NC.  For more info, go to www.raggs.com.

Shalom (Sholly) Fisch is president and founder of MediaKidz Research & Consulting, a consulting firm that provides educational content development, hands-on testing, and writing for children's media companies, such as Thirteen/WNET, DC Comics, and Sea World/Busch Gardens, among others. Prior to founding MediaKidz in the summer of 2001, Dr. Fisch was vice president for program research at Sesame Workshop, producers of Sesame Street and other educational media. In his 15 years at the Workshop, he oversaw curriculum development, formative research, and summative research for a broad range of television series, outreach projects, school-age magazines, and interactive material for online and CD-ROMs.